“The Asus ROG Chakram X’s built-in joystick feels more like a gimmick than an innovation.”

the best gaming mouse varies from person to person. One person might opt ​​for better battery life, whereas someone else prefers a high polling rate. However, what about the person who wants something different, like a joystick and the ability to hot-swap switches? That person now has an answer: The Asus ROG Chakram X.

The Asus ROG is an ergonomic mouse that features a silhouette similar to a Logitech G502, but the customization of the Strix Flare II Animate. Oh, and it has a joystick, a 8,000Hz polling rate, and a max DPI of 36,000.

With so many features, though, also comes a heavy weight of 127 grams and an even heftier price tag of $160. 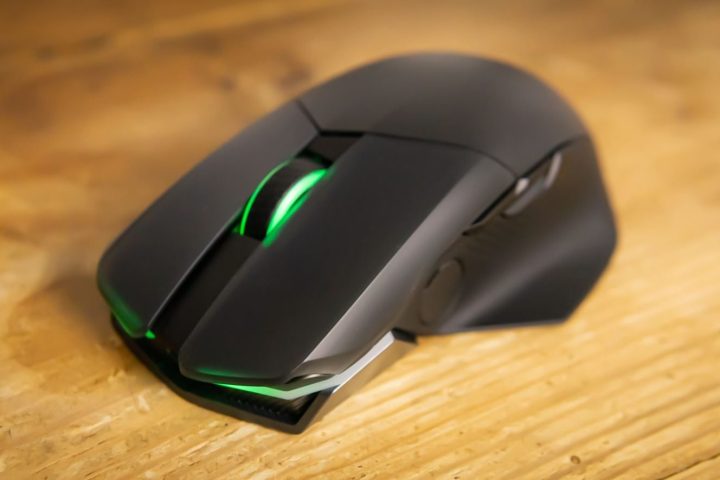 This mouse immediately reminded me of a ghost from Halo — especially when you look at the thumb rest. I got extraterrestrial vibes from this mouse, especially with the amount of RGB and smoky shell.

The first thing I noticed with the Asus ROG Chakram X was its bulky, ergonomic design that resembles the Logitech G502 with its thumb rest. However, the Chakram X has many unique design features, like a maximum DPI of 36,000, four side buttons, a removable magnetic shell, an 8,000Hz polling rate, wireless charging (to a degree), and of course, the push-fit switch sockets and the analogue stick.

While all of these features are cool, don’t expect lightness as this mouse weighs in at 127g. That’s seven grams heavier than the Razer Naga Trinity — and that has dedicated macro keys. However, the weight of the Chakram X is balanced out very nicely, and lightness was never how this mouse was marketed.

The neatest feature about the Chakram X is its analog stick on the side.

The Chakram X has everything most wireless gaming mice do nowadays, like a small 2.4 GHz dongle, a paracord cable, quick charge. and a bootload of RGB. However, the Chakram X features hot-swap switch sockets and a joystick on the left side. Accessing the switches is very easy — just lift the magnetic shell and left and right buttons.

This isn’t the first time Asus released a mouse with hot-swap sockets, as it was available on the previous version of the Chakram and the ROG Gladius III. As a mechanical keyboard enthusiast with close to 20 sets of switches, I love the idea of ​​having hot-swap compatibility on a mouse because mice switches are cheap and offer a ton of customization.

The neatest feature about the Chakram X is its analog stick on the side, which is said to offer a gamepad-like level of control. The thing is, it’s incredibly awkward and uncomfortable to use. The analog stick feels very stiff compared to a normal gamepad stick and, even though the Chakram X comes with a taller one, that didn’t help things. Fortunately, the Chakram X comes with a joystick cover that allows you to shed the stick entirely, which was most comfortable for me. 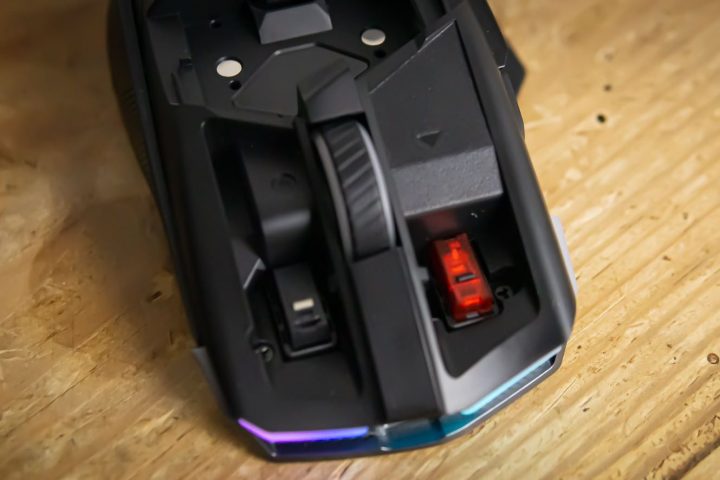 I’m a big fan of the RGB on the Chakram X because you can actually see it when using the mouse. The front of the Chakram lights up the scroll wheel and the ROG logo, but that’s obviously covered by your hand. The ROG logo can be removed in place for your own logo or design if you’re crafty enough. In front of the Chakram is a USB-C connector, which not only gives your 25 hours of battery life in just 15 minutes of charging, but bumps the polling rate up to 8,000Hz.

If you plan on utilizing all of the RGB while going wireless, you’ll want to keep your USB-C cable close as you’re only getting 59 hours of use in between charges. However, if you have some spare coins in your pocket, you can pick up the Asus ROG Balteus Qi RGB mouse pad, which enables wireless charging.

I encountered some problems with the included Armory Crate software. Upon installation, it greeted me with a loading screen that seemingly never ended.

When I finally got into Armory Crate for the first time, I was forced to update the Chakram X’s firmware and restart my PC. Oof. I haven’t run into an application this frustrating to get going in a long time.

Eventually, after numerous attempts, I was able to get into the software again to set my preferred DPI and RGB.

Despite its flaws, Armory Crate floors well for the Chakram X, as it allows you to adjust the DPI using the scroll wheel. Within Armory Crate, you can toggle digital mode, which cuts the joystick’s rotations down to just four, allowing for more precise actions, like equipment changing in-game. Of course, you still get the usual remapping options, too. 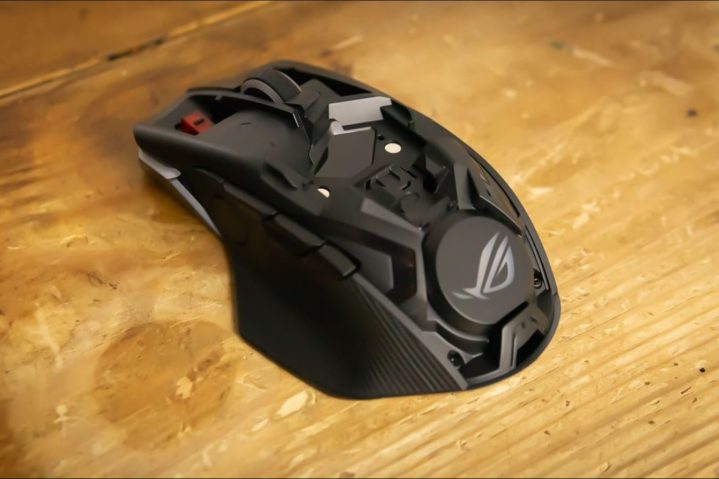 The coolest part about the Chakram X is its push-fit switch socket design, which allows you to swap switches with ease. Unlike mechanical keyboards, mechanical mice switches are dirt cheap and the push-fit sockets even welcome optical switches, so the customization is endless.

While the Chakram X welcomes foreign mouse switches, the stock ones are great and will last. The included switches are ROG’s micro switches, which are rated for 70-million clicks and have a really satisfying tactile bump and muted sound profile. 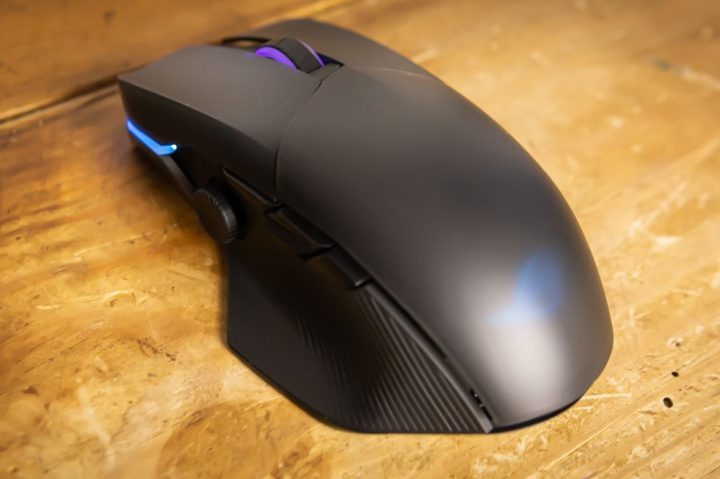 In order to get the best gaming experience with the Chakram X, I knew that I needed to use it in wired mode, as it enables the 8,000Hz polling. I remember a few years ago, when ROG first announced the Chakram, that one of the things that the company mentioned was the ability to eliminate the need for a controller when flying in a game like Grand Theft Auto.

I thought it’d be fun to load up Rockstar Games’ prized possession and give flying a chance, and it was pretty fun. However, actually using the thumbstick to fly just didn’t feel natural. Even after a couple of hours of use, I kept eyeing my $20 knock-off Xbox controller I got off of Amazon. That’s not a good sign.

The whole purpose of a joystick is to be more precise by offering 360 degrees of rotation. However, because the thumbstick is located on the side of the mouse, your full range of circulation feels limited. The maneuvers this thumbstick forced my hand into just never felt right. 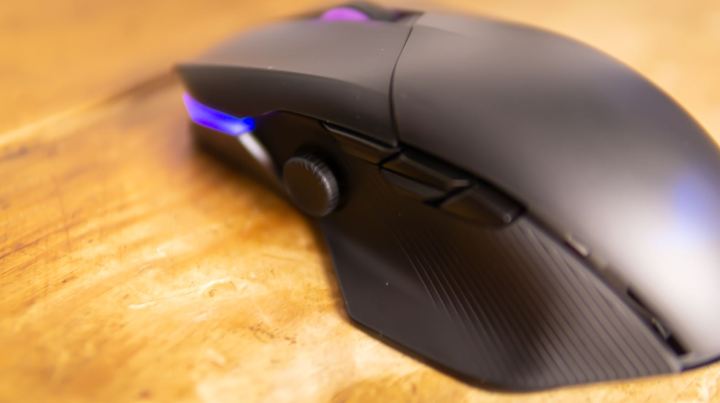 It’s sad to say that I came away disappointed with the Asus ROG Chakram X. Don’t get me wrong, I appreciate how nicely the weight is distributed, the hot-swap sockets, and wicked-fast sensor. But that’s it. The analog stick feels impractical and niche, especially for a mouse of this price.

If you love the idea of ​​a gaming mouse with its own analog stick, this is it.

However, if you want hot-swap sockets, then I’d point you toward the Asus ROG Gladius III Wireless or the Spatha X if you’re looking for a ton of buttons and the switch swapping. Without the joystick and hot-swap sockets, this feels like a slightly faster Logitech G502.

How long will it last?

The ROG Chakram X features a one year warranty, however, unless you plan on slamming this mouse around, I can assure you it’ll last many years — especially given the fact that you can swap the switches out instantly.

Should you buy it?

No, not for most people. The Chakram X separates itself from almost any other gaming mouse on the market thanks to the joystick. Unless you’re really excited about that feature, though, the Chakram X ends up being too expensive for what it is.

Sony HT-S400 review: A tough sell at this price