Bitcoin (BTC) was a response to the 2008 global recession. It introduced a new way to transact without depending on trust of third parties, such as banks, particularly failing banks that were nevertheless bailed out by government at the expense of the public.

“The central bank must be trusted not to debase the currency, but the history of fiat currencies is full of breaches of that trust,” Satoshi Nakamoto wrote in 2009.

Bitcoin’s genesis block sums up the intent with the following embedded message:

The Times 03/Jan/2009 Chancellor on brink of second bailout for banks.

But while Bitcoin keeps mining blocks unfazed, and its gold-like properties have attracted investors seeking “digital gold,” its current 75% comedown from $69,000 highs in November 2021 demonstrates that its not immune to global economic forces.

Simultaneously, the entire crypto market lost $2.25 trillion in the same period, hinting at large-scale demand destruction in the industry.

Bitcoin’s crash appeared during the period of rising inflation and the global central banks’ hawkish response to it. Notably, the Federal Reserve hiked its benchmark rates by 75 basis points (bps) on June 15 to curb inflation that reached 8.4% in May.

Furthermore, the crash left BTC trending even more in-sync with the tech-heavy Nasdaq Composite’s performance. The US stock market index fell over 30% between November 2021 and June 2022.

Fed Chairman Jerome Powell noted in his Congressional testimony that their rate hikes would continue to bring down inflation, albeit adding that “the pace of those changes will continue to depend on the incoming data and the evolving outlook for the economy.”

The statement followed Reuters’ poll of economists that agreed that the Fed would raise benchmark rates by another 75 bps in July and will follow it up with a 0.5% increase in September.

That adds more downside potential to an already-declining crypto market, noted Informa Global Markets, a London-based financial intelligence firm, saying that it would not bottom out until the Fed subsides its “aggressive approach to monetary policy.”

But a U-turn on hawkish policies seems unlikely in the near term given the central bank’s 2% inflation target. Interestingly, the gap between the Fed’s fund rates and the consumer price index (CPI) is now the largest on record. 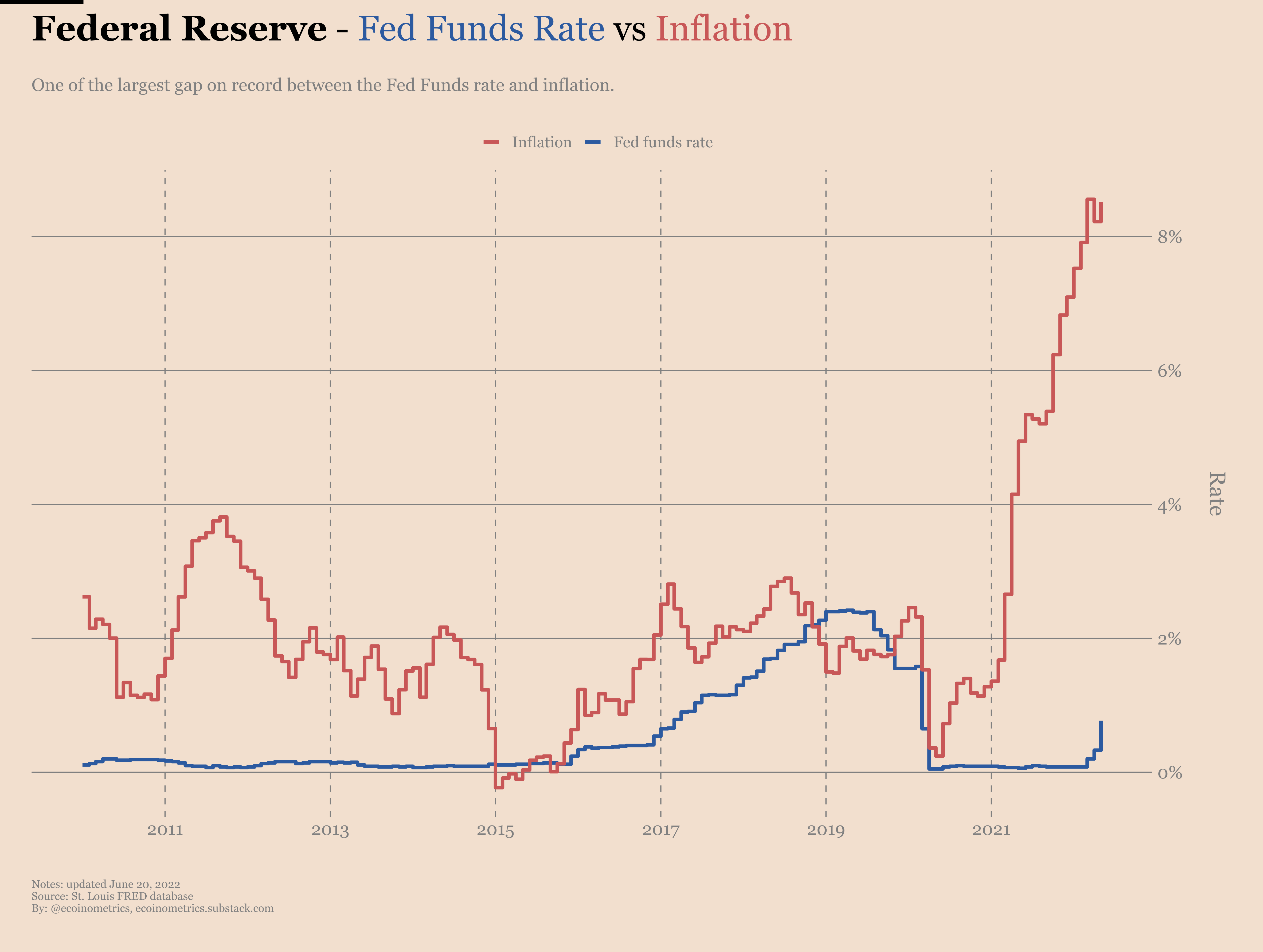 Nearly 70% of economists believe that the US economy will slip into a recession next year due to a hawkish Fed, according to a survey of 49 respondents conducted by the Financial Times.

Notably, about 38% expect the recession to begin in the first half of 2023, while 30% anticipate the same to happen during the Q3-Q4 session. Moreover, a separate survey conducted by Bloomberg in May shows a 30% possibility of recession next year. 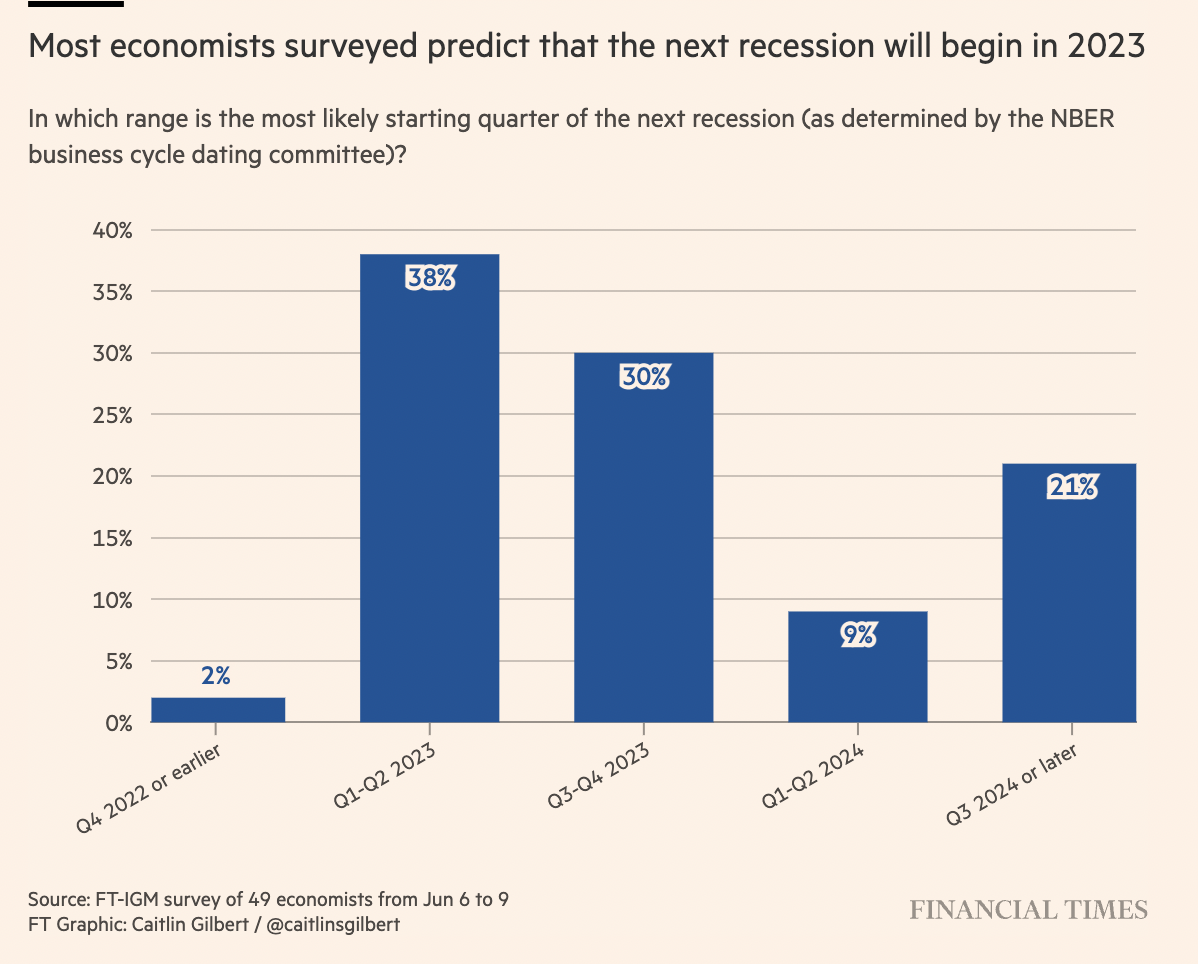 The next recession in the US will begin in 2023. Source: Financial Times

Powell also noted in his June 22 press conference that recession is “certainly a possibility” due to “events of the last few months around the world,” ie, the Ukraine-Russia war that has caused a food and oil crisis around the globe.

The predictions risk putting Bitcoin before a full-blown economic crisis. And the fact it has not behaved anything like a safe haven asset during the period of rising inflation increases the probability that it would keep declining alongside the Wall Street indexes, primarily tech stocks.

For instance, Ether, the second-largest cryptocurrency after Bitcoin, dropped by more than 80% to $880 lows during the ongoing bear cycle.

Similarly, other top-ranking digital assets, including Cardano (ADA), Solana (SOL), and avalanches (AVAX), plunged in the range of 85% to over 90% from their 2021 peaks.

“The crypto house is on fire, and everyone is just, you know, rushing to the exits because there’s just completely lost confidence in the space,” said Edward Moya, a senior markets analyst at OANDA, an online forex brokerage.

BTC bear markets are nothing new

incoming bearish predictions for Bitcoin envision the price to break below its $20,000 support level, with Leigh Drugs, general partner and CIO at Starkiller Capital, a digital assets quantitative hedge fund, anticipating that the coin will reach $10,000, down 85% from its peak level.

However, there is little evidence for Bitcoin’s total demise, especially after the coin’s confrontation with six bear markets (based on its 20%-plus corrections) in the past, each leading to a rally above the previous record high.

Nick, an analyst at data resource Ecoinometrics, see Bitcoin being like a stock market index, still in the “middle of an adoption curve.”

Bitcoin is likely to drop further in a higher interest rate environment—similar to how the US benchmark S&P 500 has dipped multiple times in the last 100 years, only to recover strongly. 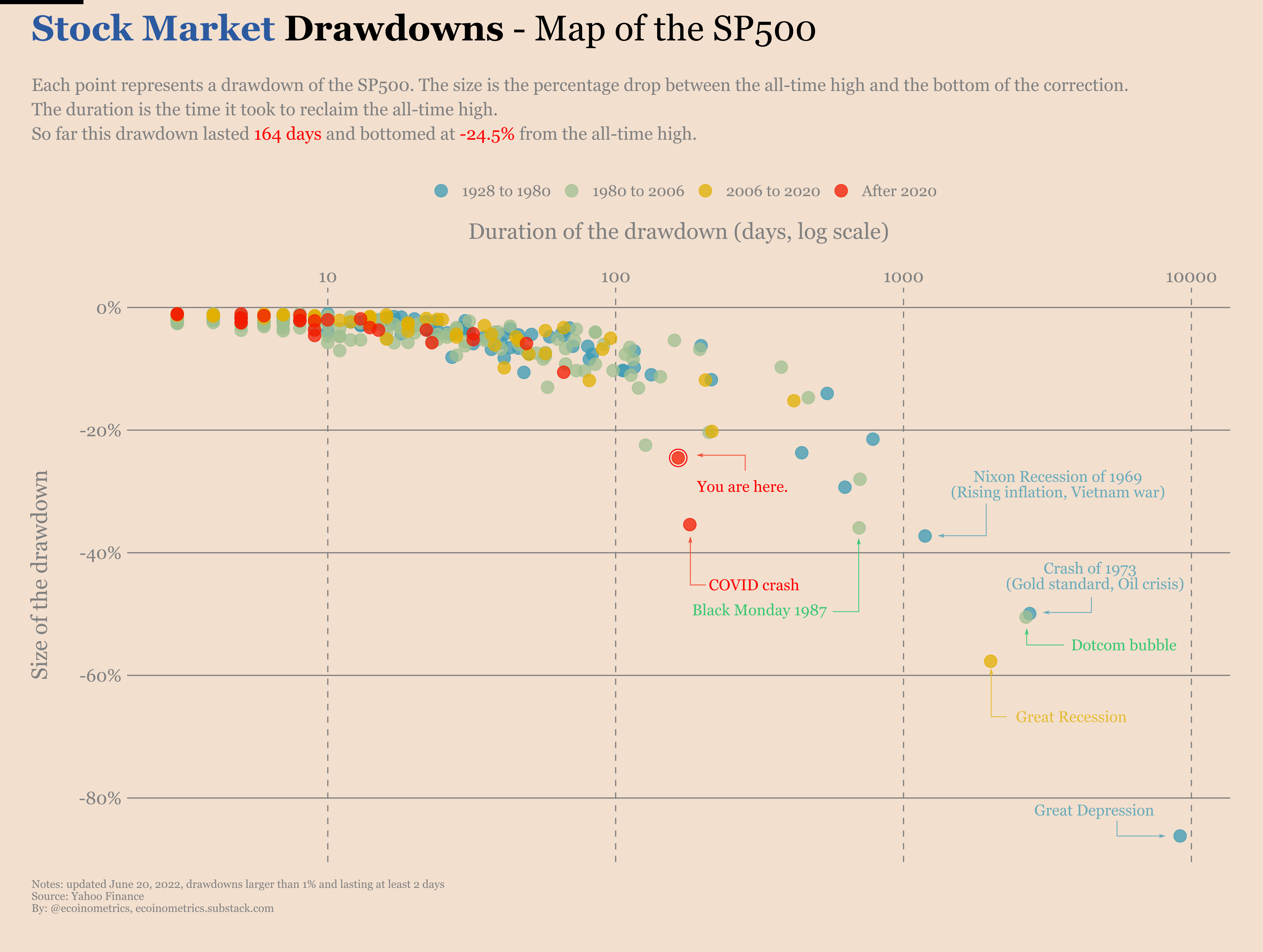 Most altcoins want those

Unfortunately, the same cannot be said about all the coins in the crypto market. Many of these so-called alternative cryptocurrencies, or “altcoins,” have dropped to their deaths this year. With some low-cap coins, in particular, logging over 99% price declines. 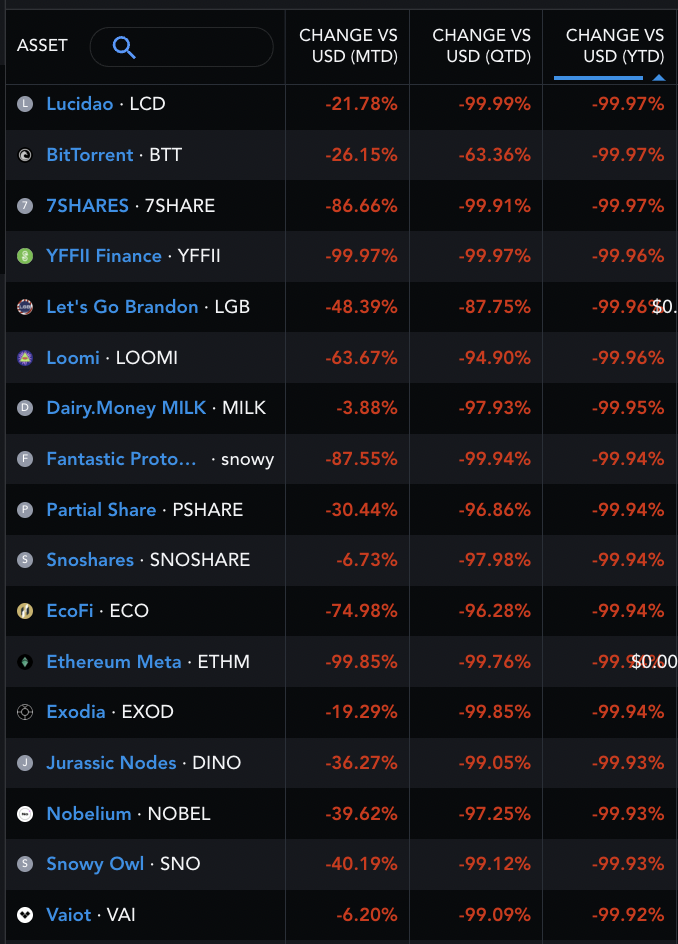 Nevertheless, projects with healthy adoption rates and real users could come out on top in the wake of a potential global economic crisis.

The top candidate to date is Ethereum, the leading smart contract platform, which dominates the layer-one blockchain ecosystem with locked over $46 billion across its DeFi applications. 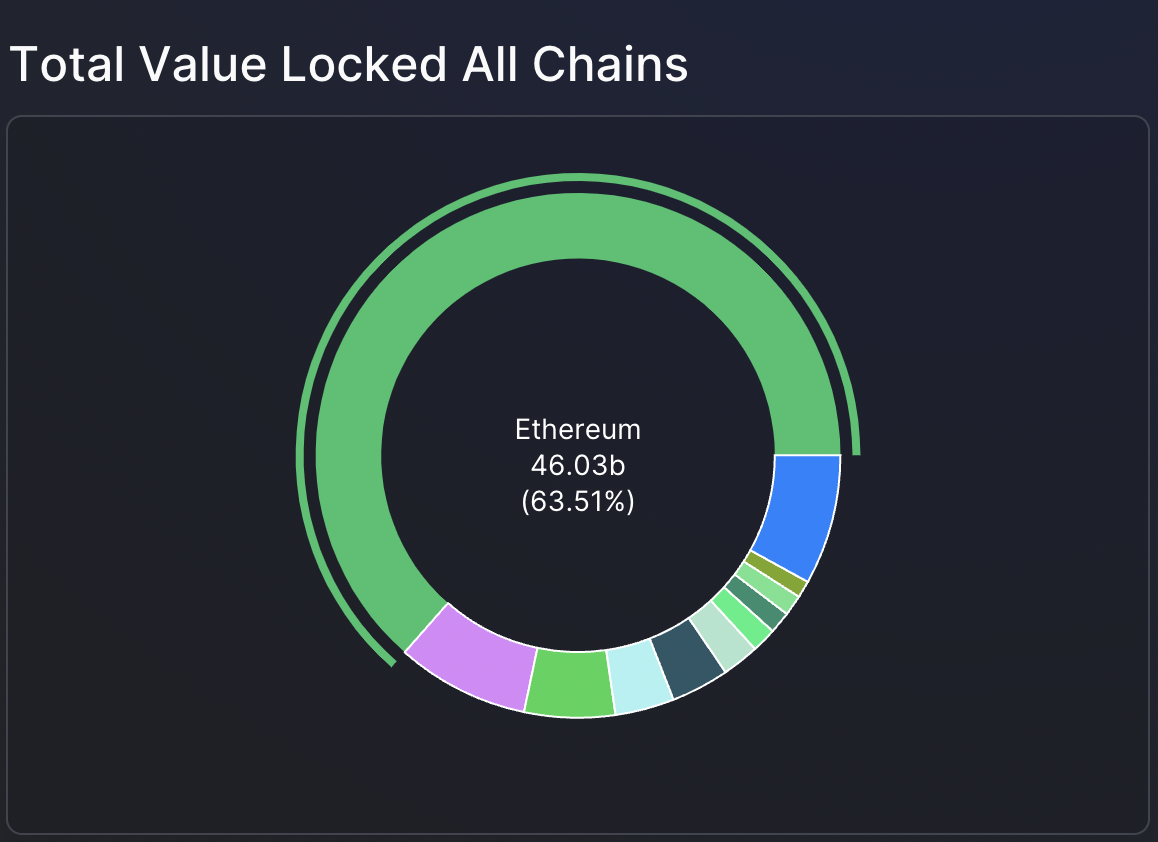 Meanwhile, older altcoins such as Dogecoin (DOGE), so have higher survival chances, particularly with speculation about possible Twitter integration in the pipeline.

Overall, a macro-led bear market will most likely hurt all digital assets across the board in the coming months.

But coins with lower market cap, dismissive liquidity, and higher volatility will be at higher risk of collapse, Alexander Tkachenko, founder and CEO at VNX, a digital gold dealer, told Cointelegraph. He added:

“If Bitcoin and other cryptocurrencies want to get back to their full power, they need to become self-sufficient alternatives to fiat currencies, especially the US dollar.”

The views and opinions expressed here are solely those of the author and do not necessarily reflect the views of Cointelegraph.com. Every investment and trading move involves risk, you should conduct your own research when making a decision.