“Shovel Knight Dig punches above its spin-off weight class, even if its roguelike elements are a little modest.”

Last December, Yacht Club Games snuck one of my titles games of 2021 in just under the wire: Shovel Knight: Pocket Dungeon. The indie was a left-field surprise, ingeniously adapting key elements of retro platformer Shovel Knight into a fast-paced puzzle/roguelike hybrid. I left that experience with a newfound appreciation for Yacht Club, respecting its ability to dissect its beloved IP and reassemble it into something new rather than spitting out an expected sequel. Its latest release, Shovel Knight Dig, only reinforces those feelings.

Launching on iOS via Apple Arcade, Nintendo Switch, and PC, Shovel Knight Dig is both very different from and very similar to Pocket Dungeon. It’s a more traditional roguelike that borrows ideas from Downwell and Spelunky, rather than a matching puzzle game with an action twist. The ethos of the two projects, however, is consistent: They’re both titles that connect the past to the present.

Shovel Knight Dig is perhaps too modest to be the next great roguelike, but it’s another fascinating piece of the franchise’s ongoing conversation with video game history. It further twists Shovel Knight’s retro framework into a pretzel, suggesting that the gap between “classic” and “modern” is much smaller than we might realize.

Shovel Knight Dig once again chronicles the adventures of the series’ titular hero as he digs through dirt and rival knights alike. At this point, each Shovel Knight spin-off feels like an episode of a Saturday morning cartoon. The heroes, bad guys, signature aesthetics, and excellent music all carry over but they’re reshuffled into another low-stakes bottle episode. The loose narrative justification here is as irrelevant as it is superfluous. There’s a pit that Shovel Knight needs to get to the bottom of. That’s all you need to know.

… a clever game that speaks the language of modern roguelikes and arcade classics in the same breath.

What’s fun about Shovel Knight as a whole is the way it chases history. The first game was an homage to NES platformers, as if someone had dug up a long-forgotten mascot from the era. Fully committing to the pastiche, Yacht Club is now bringing us a sort of alternate universe where Shovel Knight replaces something like Mario. The more it capitalizes on the IP with spin-offs like this, the more it feels the part. If Pocket Dungeon was the series’ Dr. Mario, Dig is perhaps its Wario Land.

The remix this time around is that Shovel Knight makes his way down a series of vertically constructed levels (they aren’t fully procedural, but they shuffle different platforming sequences together), using his trust shovel to dig through dirt blocks, collect gems, and pogo off of enemies. There are temporary relics and power-ups to gain on each run, providing the traditional roguelike hook of lucking into a great build. It’s very similar to Downwell, another mobile roguelike that inverts expectations by having players platform while falling. The concept is a natural fit for Shovel Knight — in fact, that game’s movement techniques make even more sense in this context. Of course, he’d use his shovel to dig downwards rather than move side to side! 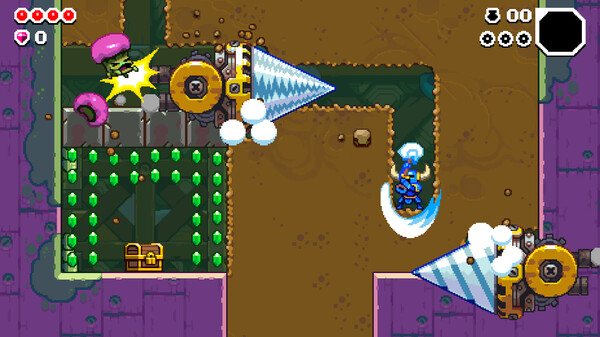 Naturally, your brain might go back to even older reference points when you see it. It feels like a modern cousin of Dig Dug and Mr. Driller, taking the satisfying tunneling hook from those classics and stitching it into a fast-paced action game. It’s a perfect fit, creating some puzzle-like sequences where players need to snake through dirt quickly — but carefully if they want to reach valuable gems or each level’s collectible cogs.

I love that I can see the influence of both a 2015 and 1982 video game in here, but I’m especially impressed that those pieces fit together this well. That’s something that was fundamental to the original Shovel Knight’s success, as Yacht Club created a game that felt both preserved in amber and completely new. That’s once again been accomplished here with a clever game that speaks the language of modern roguelikes and arcade classics in the same breath.

Downwell isn’t the only modern game that springs to mind when I’m playing. Dig shares some DNA with Spelunky as well, specifically in its approach to secrets. Items like keys will trail behind the blue hero, but will be dropped if he’s hit. There’s a slight metagame on top of the regular levels where players need to piece together what each item does and then safely try to escort it down to its proper place. Getting an egg to a nest, for instance, gives players a bird companion that can attack enemies. Those micro-discoveries layer some added intrigue into each run and present more high-level play when trying to juggle multiple items at once (something I’m sure will come into play in its ranked modes, like daily runs).

I can’t help but feel like Dig is holding back at times, scaling back to meet its spin-off positioning.

It stops short of digging as deep as a genre staple like Spelunky, though. While my first two hours were challenging and pushed me to observe and learn my surroundings, everything got much easier when I unlocked an alternate armor set that reduced the amount of damage I took. I breezed through levels at that point, almost entirely ignoring the myriad of relics and perks meant to make each run feel distinct as I melted down familiar bosses without much worry.

I certainly don’t mind the idea of ​​a breezy roguelike that can be cleared after four or five hours (Lord knows the genre could use more games like this). Pocket Dungeon successfully took the same approach, opting for more immediate closure over a long, slow climb. Though I can’t help but feel like Dig is holding back at times, scaling back to meet its spin-off positioning. I’d have loved to see a more confident roguelike that allowed for more build experimentation — not because that’s what I want from the genre and more so because the right pieces are there. 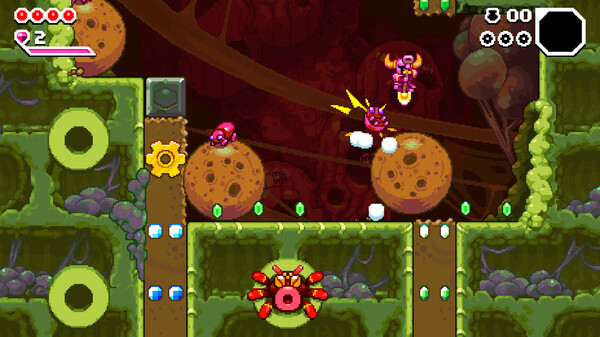 Then again, that limitation is part of the charm. If I’m really buying into the alternate timeline where Shovel Knight is NES franchise royalty, Dig really does feel like one of those lovable B-games where you can see the developers having a blast as they remold the franchise like Playdough. The modest scale of titles like that is part of the appeal, turning them into surprising underdogs that punch above their weight class.

I assume we’ll get a full-scale Shovel Knight 2 at some point, but I find myself more excited about these era-fusing side releases for now. Like Pocket Dungeon, Shovel Knight Dig is another little gem in Yacht Club’s growing treasure trove of a franchise.

Shovel Knight Dig was reviewed on Steam Deck via a PC build of the game.

Introduction to Viper in Go and Golang

The King of Fighters XV review: The king still rules