“The Logitech G Cloud Gaming Handheld is a well-built, but niche device for hardcore cloud gaming enthusiasts only.”

the Logitech G Cloud Gaming Handheld is the first of a new kind of gaming device: a handheld tailored specifically to cloud gaming. Streaming games from the cloud is something that people can do with a PC, phone, or samsung tvso there’s a lot of pressure on this handheld to prove why players should be interested in it … especially when they can buy a cheaper mobile controller like the Razer Kishi V2 for their phone.

After going hands-on with the device, it’s definitely not without its merits. It’s comfortable to hold, prioritizes the cloud gaming apps out of all the app fluff on a typical phone, and has amazing battery life. It’s also an incredible niche product that probably won’t be worth the $300-plus you’ll have to spend on it if you’re not already all-in on cloud gaming.

The specs on deck

While this may seem like a wholly original piece of technology, it’s really just a heavily modified Android tablet built to look and play like a Nintendo switch. The Logitech G Cloud Gaming Handheld features a seven-inch multitouch IPS that displays at a 1920 x 1080 resolution with a 60Hz refresh rate. While it’s not pushing the boundaries of mobile hardware, the screen and resolution are adequate for most cloud gaming, which tends to sacrifice resolution first.

This device will only appeal to the most hardcore cloud gaming fans who don’t want to sit at their console or computer.

the Logitech G Cloud Gaming Handheld has all the buttons you’d expect from a modern controller. Its triggers are a bit small, and its buttons and D-pad feel softer when pressed than I prefer, but the controls still felt very responsive. The textured grips on each side make it more comfortable to hold than a Nintendo Switch Joy-Con. The Logitech G Cloud Gaming Handheld also supports features like haptic feedback and 3D gyroscope, though these never were that noticeable or useful during my time with the device.

Running on a Snapdragon 720G with only 4 GB of RAM, this isn’t the most powerful hardware out there, even in its price range. Still, that doesn’t matter much when it can run the Xbox Series X version of a game like deathloop smoothly because the handheld itself isn’t running the game natively. As a result, one’s internet connection will make or break the experience.

Although my experience streaming cloud services on the device was smooth, I was also very limited in where I could play it as a Wi-Fi connection or Ethernet connection is required. With no 4G or 5G support, the Logitech G Cloud Gaming Handheld isn’t a device I’d want to take on a trip where Wi-Fi may be questionable, so it fails to compete in another area where devices like the Nintendo Switch thrive . 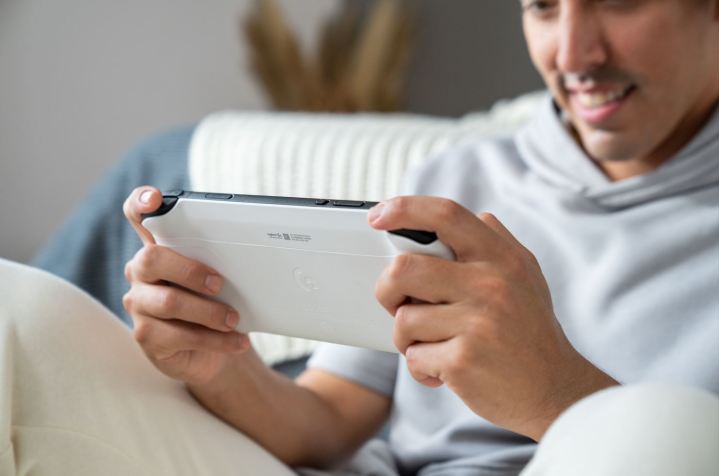 It’s most useful at your home — somewhere where you probably already have a console, phone, or TV that can do the same things and play the same games, perhaps even natively. Because of that significant limitation, this device will only appeal to the most hardcore cloud gaming fans who don’t want to sit at their console or computer. That’s a shame because its cloud gaming apps are good, and it has a significant advantage over other gaming handhelds in a key area: battery life.

Switching up how you play

The Nintendo Switch and Steam Deck have notoriously poor battery life, but that isn’t an issue for the Logitech G Cloud Gaming Handheld. I booted up Chivalry II on the Xbox Cloud Gaming app at 100% battery and kept the game running. The charge lasted about 11-and-a-half hours, and the device never got very warm. It’s not the quite 12 hours Logitech promises in marketing, but it’s still wildly impressive for a gaming handheld and the best thing about the Logitech G Cloud Gaming Handheld. Recharging isn’t too shabby either, as you can get it back up to 100% battery life after about 2 hours and 15 minutes of charging.

The Logitech G Cloud Gaming Handheld is a great way to experience mobile games that have controller support, but aren’t on a system like Nintendo Switch.

It has a custom UI created with the help of Tencent Games and runs on a version of the Android 11 OS. While players can sync apps from other Android devices onto the Logitech G Cloud Gaming Handheld, it has four primary apps: Xbox Cloud Gaming, Nvidia GeForce Now, Steam Link, and Google Play.

the Xbox cloud gaming app lets Xbox Game Pass Ultimate subscribers play select games via the cloud. The library is already solid with AAA games like Halo Infinite and Deathloop as well as great indies like Unsouled and Echo Generation. Meanwhile, Nvidia GeForce Now allows you to stream games you own from high-end PCs. I used this to play through some of 2014’s Thief and had a pleasant experience playing something released when OnLive was still a thing. Nvidia GeForce Now has secretly become one of the best cloud gaming services, as it’s great for gamers who can’t afford high-end PCs. 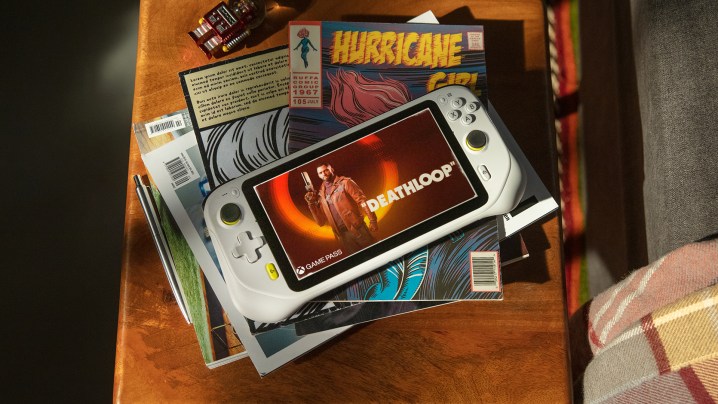 If you prefer your own PC build and just want to game from a different part of your house, Steam Link lets you stream games running on your PC. If you want to use any other cloud gaming or mobile apps, you’ll have to download them from the Google Play Store. The Logitech G Cloud Gaming Handheld is a great way to experience mobile games that have controller support but aren’t on a system like Nintendo Switch, even if that’s not what Logitech built the device for.

Another area where the Logitech G Cloud Gaming Handheld shines is playing games like Doom Eternal, which had to make some sacrifices with its Nintendo Switch port. Here, you’re playing a version of the game running on an Xbox Series X or a high-end PC while getting the same handheld experience. I even got Google Stadia up and running well on the handheld, so it’s an enjoyable way to experience that platform’s library in the last few months of its existence.

While I had a good time playing various games on the Logitech G Cloud Gaming Handheld, I couldn’t help but think about how it was unnecessary every time I played it. I already own a Razer Kishi V2 and an Android phone well-equipped to play cloud games, and the Logitech G Cloud Gaming Handheld never did enough to break out of being a novelty device.

If the user experience was much better than a phone, it might’ve won me over, but the results are mixed. The touch screen is required for keyboards or number pads, so you can’t even unlock the device without using the touch screen, even though it otherwise features fully remappable controls. You can pin apps, but can’t make folders. Unless you have an iOS or Android device with a poor screen that can’t use cloud gaming services, this product isn’t offering anything that is uniquely necessary.

With a current price of $300 and an eventual $350 price tag looming over the device, the Wi-Fi-limited Logitech G Cloud Gaming Handheld squarely sits as a decent device that will only appeal to hardcore cloud gaming enthusiasts like myself. At that price tag, most players would be better off buying a Nintendo Switch OLED model, saving a bit more and picking up a Steam Deck, or spending less on a Razer Kishi V2 to dabble in cloud gaming on their phone.

Cloud play has become a very supplementary form of gaming, and as a result, this is also a very supplementary device for cloud gamers. If the device already intrigues you, you might get some mileage out of it. But with services like Xbox Cloud Gaming coming to the meta quest, Samsung TVs, and other hardware you probably already own, the Logitech G Cloud Gaming Handheld doesn’t do enough to prove that a cloud gaming device like this is necessary. It’s for those who want a fourth or fifth way to cloud game in their own home.

Why is the price of Houbi Token up 12% today as the rest of the market slumps?

This is the stunning view humans will soon get to experience