After the big move to its custom Tensor chip last yearGoogle is continuing its quest to use machine learning to unlock enhanced apps and features on the pixels 7 other Pixel 7 Pro. While the specs and design aren’t major departures from its predecessors, the addition of smarter software, upgraded cameras for the Pixel 7 Pro, and aggressive pricing result in two of the best flagship phones for the money.

On the outside, the Pixel 7 and 7 Pro have gotten a subtle makeover including a fresh range of colors and a more refined chassis. You still get Google’s signature camera bar in back which spans the width of the device. The main difference is that now it wraps seamlessly around the sides of the phone, hopefully adding a bit of durability in the process. 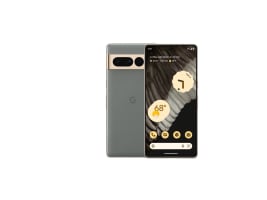 Similar to last year, the Pixel 7 features a matte, brushed aluminum finish while the Pixel 7 Pro gets more polished sides. But if you ask me, I kind of wish Google used the matte texture on both. Not only does it hide fingerprints better, it also makes the Pixel 7 a bit less slippery. And that’s even with Google softening the Pixel 7 Pro’s edges to be about 20 percent flatter than before.

Notably, while the size of the Pro’s display has stayed pat at 6.7-inches, the standard Pixel 7’s 6.3-inch screen is slightly smaller than the 6.4-inch panel on the Pixel 6. It’s not a huge change, but it’s just enough to make everything a bit easier to do one-handed. Especially if you don’t have huge meat claws like me. As for the displays themselves, just like last year (noticing a pattern?), the Pixel 7 gets a 2400 x 1080 90Hz OLED screen while the Pixel 7 Pro features a higher-res 3120 x 1440 panel with a slightly faster 120Hz refresh rate. That said, both screens look great, pumping out excellent brightness, deep blacks and lively colors. Additionally, while Google has brought face unlock back to the Pixel line, you still get an under-screen fingerprint reader. You’ll need that for more sensitive functions like online payments. And for general durability, the Pixel line has retained an IP68 rating for dust and water resistance, which is good for dunks up to five and a half feet deep for up to 30 minutes.

While the new Tensor G2 chip may have unlocked some enhanced machine learning capabilities, everyday performance is pretty much the same. In fact, the main Cortex X1 cores are only 50Mhz faster than last year’s silicon. That’s not to say you can’t play games or edit videos on this thing, but if you’re the kind of person who gets really jazzed up about transistor counts or teraflops, you’re better off going for a phone with one of Apple’s A-series chips or even a Qualcomm Snapdragon 8 Gen 1. I also noticed that during the initial setup and some more intense workloads, the backs of both the Pixel 7 and Pixel 7 Pro got warmer than most phones. Don’t get me wrong, it’s not toasty enough to cause anything more than some sweaty palms. And while performance was generally smooth and hiccup-free, I feel like Google’s Tensor chips just don’t have quite the same level of performance overhead as you might get from silicon in other high-end handsets.

However, what the Pixel 7 line lacks in raw horsepower, Google makes up for with a long list of sophisticated software. One of the biggest additions is expanded functionality for the Direct My Call feature, which is designed to help you better navigate those awful automated voice menus you run into when calling big businesses. But now, by using Duplex to pre-cache options, you’ll be presented with a text-based menu as soon as you connect, instead of having to wait to hear all the choices first. Granted, Direct My Call’s new caching abilities don’t work on smaller mom-and-pop shops. But stuff like this along with other features such as Hold For Me, the truly excellent Pixel Recorder app and the new Audio Message Transcription ability, combine to provide a really thoughtful software experience that can often save you some time and a headache or two.

Of course, the other area where Google really flexes its ML-based powers is with its cameras. In terms of hardware, the Pixel 7 still packs a 50MP main camera and a 12MP ultra-wide shooter, with the Pixel 7 Pro getting a slightly longer telephoto cam with a 5x optical zoom (up from 4x on the Pixel 6 Pro). Both phones also get the same 10.8MP front cam, which even without a true autofocus system like you get on the iPhone 14 line is more than adequate for snapping selfies. Thanks to the Tensor G2, low-light photo processing using Night Sight is up to two times faster, and that’s a difference you can really feel. On previous pixels, I’ve had to wait six seconds or more to shoot a pic when it’s really dark. But when you can cut that time in half, it’s a lot easier to hold the phone steady while the Pixel 7 does its thing. Face Unblur has also been improved, though the effects are subtle.

While it can be a bit hit-or-miss, the more exciting new camera feature is Photo Unblur, which can sharpen old photos, regardless of when they were taken or what camera took the shot. It’s the kind of thing that can save old photos that might otherwise be considered unsalvageable – and all you have to do is find the setting inside the Google Photos app. Take for example a shot of my wife and I at a wedding back in 2018. In the original photo, everything is soft. But after using the Photo Unblur tool, suddenly my face has definition. Though as you can see from the remaining blurriness on my wife’s face, things aren’t perfect. In another even more impressive example (not seen here), Photo Unblur removed almost all the softness in my face, so you can really see how upset I was about blowing up a giant pool floaty without the help of a pump.

For video, the big new feature is Cinematic Blur mode, which attempts to add a soft bokeh to the background of your clips to create a more film-like look. In general, the results are pretty good, though it’s not completely foolproof. Depending on the scene, you might notice some spots where that bokeh is applied unevenly or where it pops in and out as things move around, which can be a little distracting.

As for the Pixel 7 Pro, not only does it get the ability to shoot macro shots using the phone’s ultra-wide cam, it also has a longer 5x telephoto lens and improved zoom processing. Taking macro shots is as easy as moving the phone close to your subject, at which point the P7 Pro will automatically switch to macro mode. There are no buttons or settings to activate, and the results aren’t bad either.

Meanwhile for zoom shots, the Pixel 7 Pro produced a sharper image than the S22 Ultra at 5x, while also keeping it close at 10x, despite Samsung’s phone costing an extra $300 and packing a longer 10x lens. Despite Google’s improvements to Super Res Zoom, there’s only so much algorithms can do, because at 30x, it’s pretty clear the S22 Ultra has an advantage in optics.

But, for general photography, the Pixel 7 and 7 Pro are still in a class of their own. Compared to the S22 Ultra and the iPhone 14, the Pixel 7 line routinely captured pics with superior dynamic range. This leads to photos with more vibrant colors, less blown-out highlights and just generally sharper details. Same goes for low light, where Google’s Night Sight consistently captured more well-exposed pics with better textures and richer hues. When it comes to longevity, both phones offer solid battery life. However, the Pixel 7 delivers a pleasant surprise, because thanks to its smaller, lower-res screen, it survived a touch longer than the Pro in both benchmarks and real-world usage. On our standard video rundown test, the Pixel 7 lasted 17 hours and 54 minutes, which isn’t quite as good as the 21:17 we got from the iPhone 14 Plus, but still respectable. Meanwhile, the Pixel 7 Pro fared just a touch worse with a time of 16:42. But regardless of which phone I was using, even with moderate to heavy usage, the Pixel 7 Pro always had at least 25 percent left in the tank at the end of the day, while the standard Pixel 7 often had upwards of 30 percent still in reserve.

Charging is also largely unchanged from last year, with both phones getting 30-watt wired charging, wireless charging and support for reverse power sharing, in case you need to send some excess juice to a different device in need. The one caveat is that while wireless charging can go up to 20 watts for the Pixel 7 or 23 watts on the Pro, that’s only when using the Pixel Stand 2. If you opt for a standard Qi wireless charging, speeds top out at a less impressive 12 watts. When stacking Google’s latest handsets up against the competition, it’s best to tackle each phone separately. For the pixels 7, even without much in the way of new hardware, you’re getting a phone with a great screen, even better battery life and one of the best software packages around — now with new perks like an improved Direct My Call and enhanced photo processing. But most importantly, with a starting price of just $599, it’s a way better value than the basic flagships from Apple and Samsung. The one drawback is that if you need mmWave 5G, you’ll have to go with one of the slightly more expensive $699 carrier models sold by Verizon, AT&T and others.

Meanwhile, with a price of $899, the Pixel 7 Pro is like an even more well-equipped version of the S22+ for the same money. You get a big 6.7-inch OLED display with a 120Hz refresh rate, a longer 5x zoom and superior camera quality. I also think the Pixel 7 Pro flat-out looks better too. That leaves stuff like an ultra-wide cam that can also shoot macros as a nice cherry on top. So, if you don’t care about stylus support, I’d argue that the Pixel 7 Pro makes a lot more sense than the super expensive S22 Ultra. And I haven’t even touched on Google’s new and improved Real Tone processing mostly because, even though I’m biracial, both sides of my family are lacking in the melanin department, and I just haven’t had time to really put it through its paces. But regardless of which one you prefer, with the Pixel 7 line and Tensor G2, Google is really showing how a software-first approach to phone design can really shine.

All products recommended by Engadget are selected by our editorial team, independent of our parent company. Some of our stories include affiliate links. If you buy something through one of these links, we may earn an affiliate commission. All prices are correct at the time of publishing.

Samsung is partnering with Patagonia to reduce microplastics

The best Labor Day tech sales we could find