“Scorn impresses as a visual tribute to HR Giger, but half-formed gameplay hurts its horror more than it helps.”

scorn has three things on his mind: birth, death, and HR Giger.

Heavily inspired by the Swiss artist known for creating the iconic Alien Xenomorph, Scorn isn’t just interested in imitating Giger’s biomechanical aesthetic for flattery’s sake. Instead, the developers at Ebb Software are eager to engage with the thematic threads present in his work. It’s an unconventional horror game that explores birth trauma through a series of grotesque and nightmarish images, from claustrophobic flesh canals to bloated fetus monsters. Though taking the deeply personal works of a singular artist and turning them into a genre video game feels a bit like squeezing a watermelon through a straw.

Scorn is in conversation with HR Giger’s art, but it’s playing a game of telephone. Despite nailing the aesthetic it’s going for with excellent sound design and striking visuals, it struggles to deliver the same intimacy that makes Giger’s work so unsettling. Even when it does, Scorn’s artistic ambitions and its video game obligations are often at odds with one another. Ebb Software makes bold design decisions here to achieve the perfect atmosphere, but those decisions make for a frustrating shooter and first-person puzzle game that never quite feels fully formed.

Rather than delivering a clear narrative, Scorn wants you to feel it in your bones. The “story” follows a skinless humanoid wandering some form of eerie alien world that looks like an HR Giger painting come to life. The horror game largely takes place in dark corridors that look like the inside of a body. Veins and flesh run through its narrow passageways, as if it’s all part of some giant being’s nervous system.

All of that is brought to life with impressive visual design, as grotesquely detailed environments pump blood into its raw body horror.

While Scorn has an abstract narrative, its thematic throughlines are unmistakable. Most specifically, birth is a running visual motif through the game right from its opening moments. Through my playthrough, I’d encounter ancient statues with glowing red wombs, have an alien parasite violently burrow into my stomach, and see a whole lot of phallic imagery. All of that is brought to life with impressive visual design, as grotesquely detailed environments pump blood into its raw body horror. Though most notable of all is its astonishing sound design, full of wet sloshing and ambient humming that benefit from a great pair of headphones.

While it’s immediately impressive as a technical feat, Scorn can be thematically elusive early on. In its opening hours, I spent a lot of time questioning if there was much meat to its unsettling atmosphere. It’ll be easy to write it off as hollow gross-out horror, but that would be underselling what Ebb Software is aiming for here with its ambitious tone piece. Though to connect its disparate images, you may want to brush up on your HR Giger knowledge first. 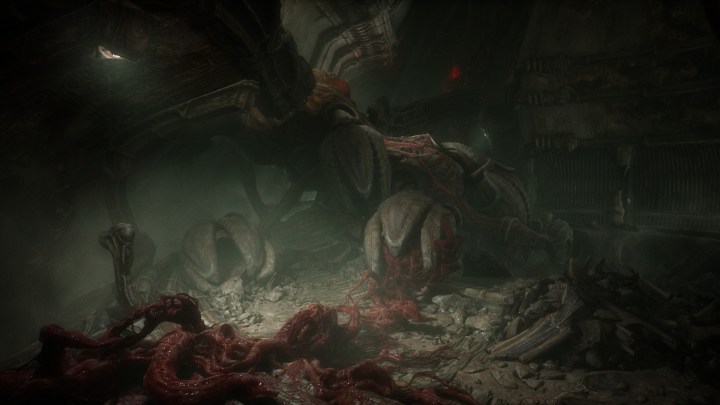 For some art critics, Giger’s work is as arresting as it is because it’s a raw projection of his subconscious mind. The artist notably had a difficult birth, one that required doctors to yank him out of his mother’s womb with forceps. Some theorize that Giger always carried that trauma with him, letting it bleed into his art. When viewed through that lens, a lot of his creepy imagery begins to make sense. His work is filled with fetuses, narrow passages that stretch like birth canals, and sterile mechanical instruments intersecting with the human body.

Scorn certainly seems to understand the appeal of Giger’s work and looks to engage with the ideas beneath the aesthetic. It’s a series of births and rebirths, with its nameless protagonist ripped out from its safe cocoon. Its horror comes from making players feel like a confused infant trying to survive the unfamiliar nightmare they’ve just been violently and suddenly sucked into. While I can appreciate the way it bucks conventional storytelling to accomplish that, there’s a key layer missing. Giger’s work feels deeply intimate, allowing us to look directly into his mind and dissect it like psychiatrists. Scorn doesn’t carry that same power, which can make its philosophical pondering about life and death feel detached from any emotion.

Nailing a vibe is one thing; replicating the deepest reaches of someone else’s psyche is a much harder task that I’m not sure Scorn pulls off.

If it seems like I’ve barely spent any time talking about Scorn’s actual gameplay, that’s because it’s the least interesting part of the project. Its most evocative moments come from exploring the horrific world like an art gallery and its most frustrating ones come from actually playing. That’s due to a certain friction that arises between Ebb Software’s artistic vision and what makes for a game that plays well.

Scorn is somewhere between a survival horror game, a first-person shooter, and a sparse 3D puzzler. The shooter aspect is at once the most under-developed and over-thought part of that equation. Throughout the game, players will interact with a small handful of enemy types. Players collect four weapons that can fend them off, which look like the flesh guns from David Cronenberg’s existence. One functions like an engine piston that can bop enemies, while another is more akin to a traditional shotgun. Each weapon only operates at a very close range, however, which makes them feel functionally similar (aside from the fourth weapon, which is hardly used due to how late its introduced). Shooting is so sparse in its execution that it left me wondering if it was added in later in development to give the atmospheric puzzle game an infusion of commercial appeal. 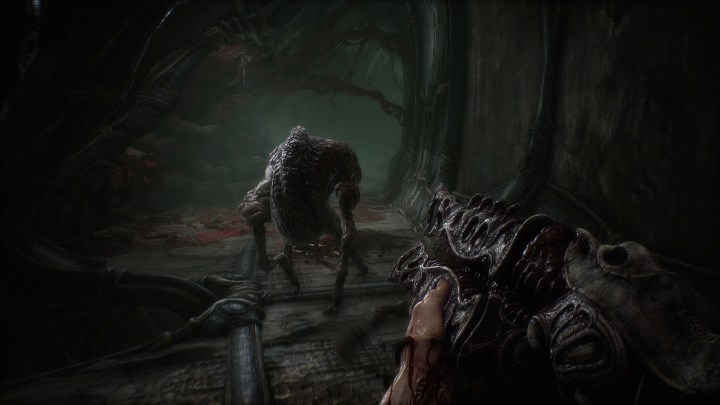 This isn’t a power fantasy, so the shooting is meant as more of a last-ditch line of defense. Shooting is a slow process and the reload button may as well be relabeled a suicide button when trying to use it mid-fight, as it triggers a painfully slow animation. Ammo is extremely scarce throughout, as bullets can only be replenished from a handful of one-time use stations. Health functions the same way, as players carry a heart-like organ that has limited healing charges. In theory, these decisions should make encounters feel more intense as players are always hyper-aware of how many resources they have left at all times.

In reality, the scarcity creates a lot of artificial frustration. When I die and reload at a checkpoint, my health and ammo remain locked where they were at the time of save. On several occasions, I’d find myself loading in with one tick of health left and no healing charges. I’d spend minutes getting back to where I was, sitting through slow in-game cinematics, only to be killed by the same acid-spitting enemy. With no way to go back and up my resources, I simply had to repeat that sequence until I made it through, replacing any good horror tension with the annoyance of having to redo the same section of a game well past the point of boredom.

It’s bogged down by underwhelming survival aspects that dampen the horror more than they support it.

Scorn is a little stronger than a puzzle game, though its most engaging moments are few and far between. I was enthused by some of its more traditional puzzles, like one that challenged me to correctly fit a cylindrical key into a lock by moving its prongs, but brain-teasing moments like that are fleeting. Instead, the game largely relies on interaction puzzles that simply require pulling a lever or two in the right order. Even with that imbalance, the puzzles are the one area where I can see Ebb Software’s identity shine through. There’s a strong atmospheric puzzle game hiding under the surface here, but it’s bogged down by underwhelming survival aspects that dampen the horror more than they support it.

Maintaining the right atmosphere seems to be a priority over nailing what’s expected of a video game, with design decisions all tracing back to an intended horror experience. That’s often to a fault. For instance, Scorn features barely any UI. A health and ammo bar pop up when aiming a gun, but the screen is otherwise unblemished. There are no objective markers telling you where to go next, no map to reference, and no tutorial text explaining how anything works. It took me a few hours to realize the game had a healing system at all, which I only discovered by pausing the game and seeing a “heal” button on the controller layout.

A good chunk of my playtime was spent walking around lost, afraid to close the game for fear I’d lose my mental map between sessions.

I imagine the goal here was to create a truly immersive horror experience, but the side-effect is a more pressing legibility issue. It’s simply difficult to see what’s happening on screen or figure out where the game wants you to go next. Levels, for instance, are often hard to navigate due to repetitive design. Snaking corridors can look indistinguishable from one another, which left me aimlessly walking back and forth down the same hallways until I found where I was supposed to go next. There’s a lot of dead space in the world design, too, with empty nooks and crannies turning small levels into dull labyrinths.

When Scorn does provide visual information, it’s often imperceptible. It’s easy to miss interactable objects due to the fact that they’re only highlighted with tiny white circles. Ace I recounted in my Gamescom preview, one puzzle had me sliding around pods, placing one into the right position so a hook could grab it. A demoist had to point out that the specific pod I needed to move had a faint sliver of light on it. With no accessibility options to help ease moments like that, a good chunk of my playtime was spent walking around lost, afraid to close the game for fear I’d lose my mental map between sessions. 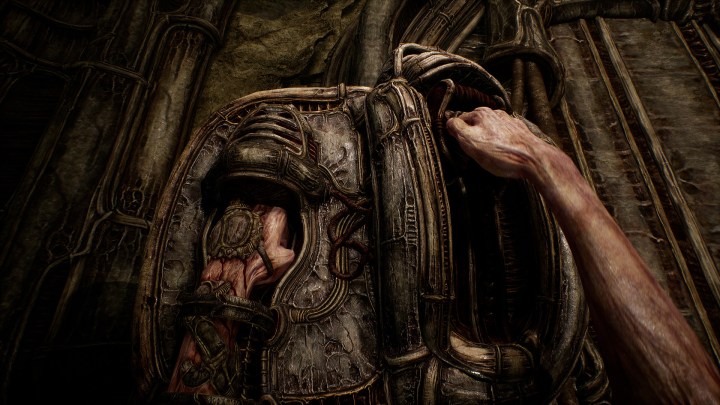 What’s difficult is that I can feel the intentional decisions behind Scorn’s low points. I get the sense that Ebb Software wants me to feel lost and stressed as I navigate its alien world. I’m supposed to wander the hallways wondering if I’ll ever escape the maze. When I’m counting every bullet I have left and praying for an ammo refill station around every corner, I imagine the experience is playing out as expected. But more often than not, those decisions left me eager to escape the game app itself rather than the frightening world housed within it.

Scorn is an unconventional and uncompromising psychological horror game that requires a lot of patience and a strong stomach to appreciate. There’s no instant gratification to be found here, as its disturbing imagery creates a grisly slow burn that games rarely dare to deliver. While I can respect what Ebb Software is going for here, I’m ultimately left feeling like its tribute to artists like HR Giger is too skin deep. Peel back its layers of aesthetic influence and you’re left with a half-formed horror game that perhaps wasn’t quite done gestating.

scorn was reviewed on PC.